The depth of winter is one of my favorite parts of the year.

Sure, it can be cold and there can be plenty of snow. Both those things are great assets of the winter. The former keeps bugs at bay, and the latter paints the world in pristine white.

Some folks shoot river rapids in a kayak for the thrill of it. Some folks climb huge mountains past the timberline in grueling conditions. Some folks will jump out of a helicopter to ski and snowboard in the most isolated places. For me, there is the challenge of winter. Not just surviving, but thriving. To scoff at temperatures in single digits, and equally dismiss double-digit winds. To wrap in layer upon layer then don snowshoes for a leisurely walk. To stand atop Nishan Hill and be shaken like a sapling by the winds of winter. 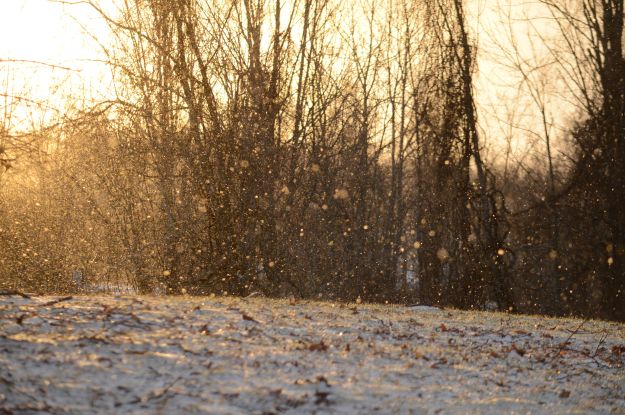 One of my favorite things about winter is the morning commute. In winter, it’s dark when I rise. There’s something about moving about a kitchen quietly, letting the dog out, putting on the pot of coffee when it is still night outside. It’s a special time of night, too. Early night still sees traffic and lights on in living rooms. Late night has its own feel. Third-shifters bound for work, folks at The Snack Store mopping up to close. At this pre-dawn hour, it is much quieter. Only the snow plow rumbles down Engleville Road, and The Snack Store hasn’t turned on the lights yet.

Sassy June wants to go on the long dog run beside the woods, and I cross the driveway to fulfill her wishes. The only illumination is the soft incandescent glow of the cabana lights, casting a yellow hue on the snow. I turn to go in and I am stopped in my tracks by the Milky Way, stretching from the southwest to the northeast across a crystal-clear frozen sky. I stand and stare and marvel at this beauty until the snow creeps into my slippers and I’m reminded I am not wearing a coat. 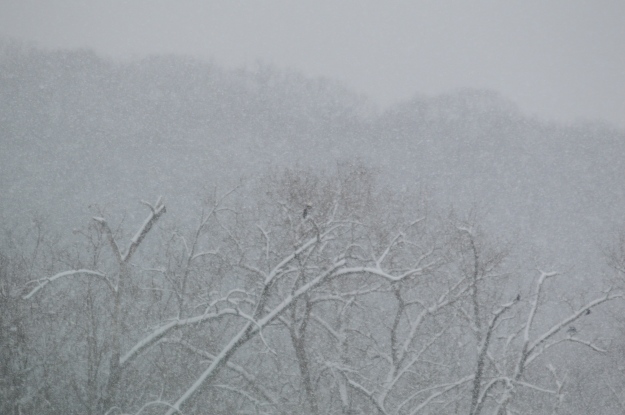 Dog in, pellet stove fed, Thermos filled, and it’s time to leave. Goodbyes and lights out, and The Ark returns to nighttime as Juney climbs onto my reading chair to go back to bed. Headlights on, three rabbits are startled and dash for the hedgerow. Pulling out, I pause to look back, and call to my angel puppy to join me on the drive. He’ll be gone four years this July, but I think of him every day. I say “Good morning, angel puppy.” to his grave, tell him there’s plenty of room in the car for a ghost. The dog’s grave, the silhouetted sugar maples and the sleeping home fade in the rear view mirror as I grudgingly depart my favorite place on the planet.

Driving in the dark. Most of the world is relegated to a cone of light directly in front of the Fun Bus. There is just enough breadth in the headlights’ beam to light the sides of the road, where my eyes keep constant watch for animals of all kinds. Many critters come out only at night, and others will take advantage of the darkness when they can. Whitetail deer are the main threat, as they move quickly and weigh as much as a man. The “Deer Watch” light is always on in my brain whenever we traverse dark roads. Snow illuminated by the headlights is entrancing, magical.

The night sky is not black. It is a deep, glowing blue. Deeper than blue, maybe. Countless stars fill the heavens, and there are often sightings of our cosmic neighbors, the fellow planets of our solar system. I’ve seen quite a few meteors while driving in the night. The moon dances in and out of mornings. Sometimes high, sometimes low, sometimes large and sometimes small, and sometimes none at all. Sometimes it will back light clouds in the sky, and cast warm orange tones on them. Sometimes it is a bright full ball that shines like a beacon, casting deep shadows on the snow like a Hollywood “day for night” shot.

It is an exclusive club this early on the road. Milk tankers haul from dairy farm to dairy farm, heading eventually to the Midland Farms dairy plant, or the Dairylea Co-Op. Farmers are out at all times. I’m likely to see a manure spreader plodding along the side of the road, headed for the entrance to the cornfield. I’ve seen harvesters cutting corn under the lights at seven and eight o’clock at night, but it seems only manure spreaders are allowed before dawn, with the exception of Agway’s huge ag trucks hauling lime to the fields in April and May. Their oversized balloon tires making them bounce as they ply the pavement. We may see a sheriff’s deputy or a State Police cruiser, winding up their shift, heading home to bed soon. Tractor trailers pull out of the distribution center east of the village, bound for stores across the area.

Somewhere along U.S. Highway 20, eastbound, the edge of the night sky begins to brighten. Deep indigo fades to pale blue. In Spanish, the word “madrugada” is used to describe this “time between night and morning”. Birds are waking now, as are people in their homes. Lights come on in houses, and a few more cars join the parade. The first yellow school bus may be seen, heading for the start of the route.

Now we can peer into the fields and see wild turkeys, the occasional coyote may streak past, galloping full speed to the safety of the woods. The monotone world of night begins to see its first hues of the day. The sky becomes brighter blue, displays wisps and ribbons of white clouds. The earliest hints of the sun begin to tone the sky in orange or pink or deep red. Thanks to the snow cover, we can see farm animals silhouetted in fields, cows, horses, goats, sheep.

Somewhere between Carlisle and Sloansville, the big red ball will crest the horizon. Twice a year it sits dead center in the highway as I drive due east. First, the clouds at the edge of the sky will alight, ablaze in red. Then the atomic fireball climbs over the end of the Earth, and I am floodlighted by a blinding beam. Now all the world is red. The sky and the snow, the road and the trees and even the sheep and the goats. Some days, if there’s heavy cloud cover, we will be denied this display. When storm clouds blanket our world, and snowflakes fly.

Now we catch the tardy. Those who would be abed by dawn, caught by the sun. A young fisher streaks his way across the corn stubble, dashing for the Schoharie Creek. A possum hastens, as best a possum can hasten, which is not too hasty, and I brake for the wildlife crosswalk. An owl of the night heads for the roosting tree. Birds seem to multiply with the increasing light, and now great flocks of Canada Geese, sometimes Snow Geese, take to the sky with a raucous clatter. After February, after hibernation season, we may smell the skunk even if we don’t see it.

I stop just past the bridge over the Schoharie, stunned by the sunrise bleeding through the fog, shadowy arms of trees contrasted against the brilliant light. I have a three minute window to shoot this photo before the Earth moves beneath me and the moment and image pass. Climbing the on-ramp to Interstate 88, beside the field where I shot fifty frames of a mother coyote on the hunt, the rich flatlands stretch out over my right shoulder. The sun is pouring down between ridges, and lights the village of Schoharie with a bright beam. Up, up, up the long draw I climb. Up out of the Schoharie Valley, crossing the ridge, parallel to the Mohawk River Valley, and on into the Hudson River watershed. As I settle onto the flat stretch of highway, the full sun leaps up from the horizon, and the lights come on for a shiny new day.

Now it is truly dawn, and the whole world seems to notice. There are more cars on the road, and school buses on the secondaries, red lights flashing. Cawing crows and ravens fly about, and a bald eagle is sighted over the swamp. This is where I saw the bear a number of years ago, trotting out from the edge of the woods, startled to find a road before him. The sky holds one show after another, and I must tell myself I can’t stop and shoot more pictures. I already spent ten minutes by the creek shooting the fisher and the trees in the golden sunrise, and each minute’s delay takes from my employer’s time. 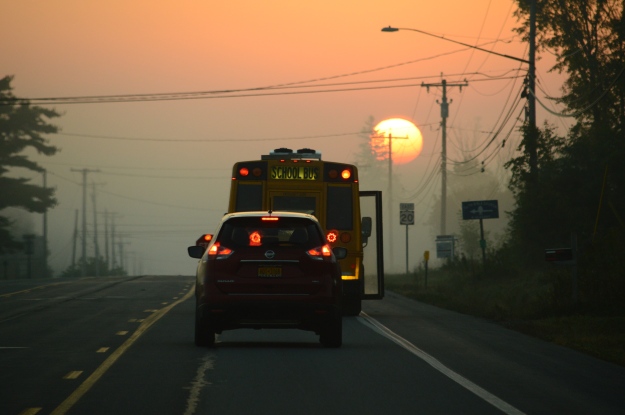 The light angles steeply into secret holds in the woods, casts a copper glow on everything. In a matter of minutes it will rise up out of the morning show. It will burn off the dramatic fog. It will drive the fishers and possums into their daylight quarters, and rise into the blue sky until this magical time, too, passes, and we are drenched in daylight.

As spring nears, the captivating three-in-one mornings become a thing of the winter past. I’ll rise as the sun knocks at my kitchen window, and in summer the light will stretch out to nine o’clock. Now patience is required. I will have a dozen more three-in-one mornings, stolen in short stints at campsites on a remote lakeshore, or garnered as part of the pre-dawn fishing excursion on Sundays. Then I must wait. For August. Then September. The sun centers itself on U.S. Highway 20 again, and while the rest of the world begins preparing for winter, I drive easterly, a foolish grin on my face, looking like the village idiot.

And I will revel in the darkness that begins my favorite season, and eagerly anticipate another quarter-year immersed in the magic of three-in-one mornings.

Take care and keep in touch.