After missing out the first day, Ryan scores a respectable Bass down past the fork and to the north (13″). One 13-incher for me, maybe a Crappie .Boat motor running poorly, fouling plugs, but didn’t leave us stranded.

A pancakes & bacon breakfast, tuna salad on rye for lunch and Famous Deconstructed Pot Roast Dinner with fresh-baked corn bread. A brief shower in the afternoon, but otherwise partly cloudy with periods of full sun. Temps in the high 70’s. Ryan got a sunburn.

Mike and Joyce and Ann and Eric struck camp a day early, and we now have the island to ourselves. Resident friends included the robin, a pair of grackles, probably a nesting pair, and a couple of sparrows that I may mistake for pine siskin.

I awoke somewhere in the wee hours and stepped out of my tent. The night air was completely still. The three-quarters waxing moon hung high to the south, illuminating the fog with its orange glow. Venus stood thirty degrees above the horizon due east, and its doppleganger was reflected in the glass-smooth waters of our own personal lake. Except for the father-and-son with their own island next door, we have the entire campground to ourselves.

Ryan retired early, and I sat up for a long while, listening to loons playfully echoing one another. I slept the fitful sleep of the dreamer, exhausted by his adventure.

I awoke fairly early. Some awareness of different surroundings, probably. Things scurrying on the forest floor beside my tent, birds chirping ten feet away. Also, I’m as excited to be at camp now as I was at ten years old, and like to be up early. The world is different at sunrise. Before sunrise. Before the world awakens. It’s very, very quiet (except for birdsong), and all the world feels closer, more intimate. It is the best time to feel a personal connection with the world.

This morning, however, I heard the gentle sounds of a light rain. Barely more than a drizzle. As if the rain was waning and was dripping from the trees. I laid in bed (well, “in sleeping bag”) a bit longer, waiting for the rain to stop. I was awake, and as I listened to the sound it seemed oddly directional. I leaned over toward Ryan’s side of the tent, and found his iPhone in the net bag, set to sleep machine mode. All that water noise was Ryan’s phone!

I flew out of bed and ran from the tent with camera in hand to capture that golden hour.

Dawn On The Privvy

Ryan whipped up a bacon and pancakes breakfast with maple syrup. Real maple syrup, We live in maple syrup country, after all, and in “March Journal, March 2016”, there’s a whole bit about Max’s Sugar Shack, tapping trees and boiling sap in the Cabana.

After breakfast, we hit the water. Forked Lake has a fork in it, as the name implies, and at the confluence of the two forks is the deepest part of the lake, with about forty feet of water. This is the deep hole where the Landlocked Salmon hide, a quarry we seek each year. Joe caught one about three years ago, and we haven’t seen one since. We motored past the fork and to the north, headed for a small cove Ryan had had luck at before. Sure enough, before long he pulled a thirteen-inch bass from the clear water. Having gone fishless Monday, it was good to “break that spell”.

I hadn’t done a tune-up on the boat motor, and the AquaMarie putted along more like The African Queen, slowly wending her way down the lake, then along the north shore. We hit a few spots and motored around for a few hours, then made our way back to camp for lunch.

We had quite a crowd of locals, at times. Seems there was some kind of Dragonfly Rally. I suppose it was mating season or maybe they were just racing, but they were everywhere, along with Swallowtail butterflies (or maybe Admirals). Typical of my behavior, I personified them all and began speaking to them regularly. Usually, we’d be out on the boat and see one or the other, and I’d scold them. “You’re not supposed to be out here in the middle of the lake. You’re going to get eaten! Get back to camp, now.”

Fishing was off a bit today, and we returned again to camp after a nearly-fishless afternoon session. Ryan began to prepare his “Deconstructed Pot Roast Dinner”. He likes pot roast, but not in slices, so he cooked up the meat then cut and shredded it like chili or stew beef. He proceeded to cook the rest of Pot Roast Dinner; potatoes and carrots. All cooked in cast iron over an open fire, the final touch was baking fresh corn bread (declared as my favorite camp food) in the cast iron skillet. We hovered over this pan like quilting-bee ladies on a newborn baby. We made great fun over exaggerating Ryan’s silly name, and soon it became “Mechanically Deconstructed Rehydrated one-pot Pot Roast Meal”. No matter what you called it, it was the best camp dinner since yesterday’s. 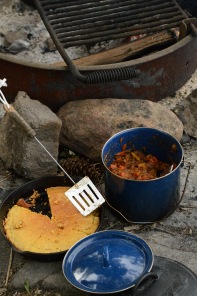 In The Company Of Loons

With a delicious dinner in our bellies, tired bodies from a hard day’s camping, and soaring spirits buoyed by the most beautiful place we know, we settled in for evening in camp. There is no end to the topics that are discussed around the fire. We laughed long into the night, now and then hearing a loon call, or the splash of a fish surfacing for a snack. By day three, we both remarked at how our faces hurt, our cheek muscles strained from an excessive amount of laughter in a short period of time.

Ryan’s my son, but calls me his best friend in the world. In a way, I wish for him that he had a compatriot of his own age, raising babies, remodeling houses, drinking heartily. Yet again, I must admit that there is hardly a greater compliment, a greater satisfaction, a greater honor, than to be best friend to your own child. The feeling is mutual.

So another sun sets on camp, and we while away the hours around the fire pit until Ryan retires first. As the journal entry states, I lingered long over the fire, watching and listening to my lake. All was still when suddenly I heard, perhaps a quarter-mile distant, a great thunderous crash, deep in the night. I realized I had just heard a gargantuan tree falling in the woods, a hundred-year-old hemlock probably, standing fifty or sixty feet tall before today. I felt a little thrill thinking I am the only person in the world to bear witness to this event. 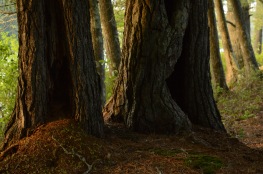 Night Falls at the Fire Pit

I retired to the tent, well-worn from a day of adventure.

I vowed not to be fooled by the sleep machine tomorrow.

Perfect Day #3, next time on Life In Engleville.

Take care, and keep in touch.

2 thoughts on “A Perfect Day, Again”

This site uses Akismet to reduce spam. Learn how your comment data is processed.