The Mourning Dove is too large to land up on the feeder. He makes his rounds on the ground as the Jay shovels aside the millet and cracked corn, digging out a sunflower seed before flying to the lilac to eat it. The sparrows dodge the heavy traffic as the little gang of Jays mobs the feeder.

The sky is grey and a light snow is falling. Not tiny flakes but not the big fat ones either. Just the right size for viewing. To watch them dance, driven in every direction by the January wind. They flit about on courses not unlike the birds’.

At the kitchen window, I lean my elbows on the counter, rest my chin in my palms, and gaze out at the snow falling, boldly contrasted by the evergreen backdrop. I see Sassy June standing in the driveway. She remains motionless and stares for the longest time. Watching the woods and lawn for bunnies or neighbor cats. I adopt her attitude, and stare myself out into the beauty of the day. Not a look to see what the weather may be, nor a glance to check on the dog, but simple, mindless, timeless staring into the ever-wondrous world. 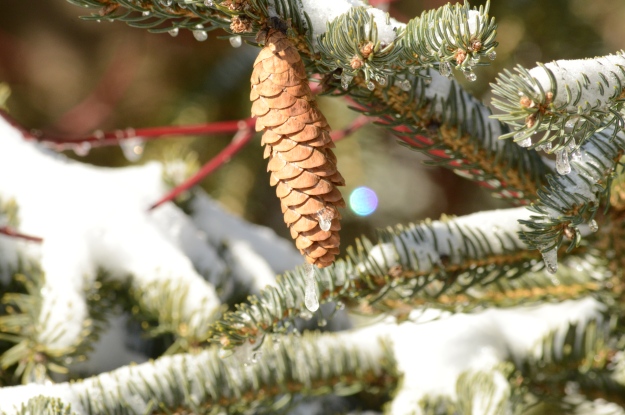 Standing by the wood stove, I continue reading between peeks out the south window at the feeder. I’m reading Keith Billington’s book about a reenactment of a turn-of-the-century dogsled patrol by the Royal Northwest Mounted Police. It is famous, or perhaps infamous, among the people and places close to the story. It is known as “The Lost Patrol”, and it is a tragically heroic story of four men in the service perishing after becoming lost in the vast and brutal Northwest Territory of Canada.

Here I sit on a January day, the perihelion having passed just yesterday, and read the account of men who rode off into the Arctic night of December and January, when the sun would refuse to rise for a month. It’s twenty four degrees Fahrenheit here, and barely a dusting of snow covers the ground. Between Fort McPherson and Dawson, the snow piles five feet deep, the temperatures plunge below zero, and winds blow so hard that small rocks and bits of shale become airborne, hurled like so much shrapnel.

Billington’s story is of a reenactment of the ill-fated 1910 patrol. In 1970, he would travel by dogsled with sixty-seven dogs and ten companions, and traverse the rugged wilderness between Fort McPherson and Dawson City. Titled “The Last Patrol”, it occurs at the last chance to see this pristine country as The Lost Patrol had, as the construction of the Dempster Highway, traversing a parallel route, was underway.

In Engleville, the sky remains a sullen grey overcast, then suddenly the sun breaks through illuminating the flakes of snow. Just as quickly, the sun hides, and the winds blow at seventeen miles per hour, shaking the trees, grounding all but the most skilled flyers. I’m called upon for domestic duty. A run to the trading post for essentials; bread, Cool Whip, seltzer water. So determined am I to return to my lazy Sunday reading by the wood stove and counting snowflakes, I pull my pants on over my pajamas rather than don long johns. Upon my return, son-in-law Matt had arrived for a Sunday visit.

Matt on the rabbit hunt

While Billington and his cohorts in 1970 slept shoulder-to-shoulder on the floor of a tiny cabin, and Inspector Francis Fitzgerald in 1910 made the decision to turn back to the Fort, we drank coffee and chatted. We looked ahead at spring projects. We spoke in that January way about getting prepared early, making plans. One can commit to just about anything from the wood stove-warmed January kitchen. Dreams and boasts are equally successful as the frozen ground and frigid temperatures make all the contemplated activities impossible just now. Many of these plans will shrink a bit when spring arrives. When trout streams beckon and spring turkey hunting occupies our thought and time. When the real work begins and we wonder if we’ve bitten off more than we can chew. Matt takes his leave, and I am left again in the warm kitchen, windows on either side and a compelling book on the table.

My over-active brain tries to suggest other activities. Continue sorting the Holiday Closet. Parting with Christmas for another year and breaking out the non-holiday oriented snowmen and other cold and snowy decor. Now that sounds like work, and I did more than my fair share yesterday, anticipating, eagerly awaiting a sedentary Sunday. I could take a hike with Sassy June, but did that yesterday, too. A nice long walk. I could go out and fuss with the Ski-Doo, see if I can get it started for the first time this season, but there’s really not enough snow cover for snowmobiling. The two sides of my brain briefly debate, and my will to sit and read somehow overrides my hyperactivity obsession.

The dog must be let in or let out or given a snack at regular four-minute intervals as I make my way through “The Last Patrol”. Between dog demands, Doone The Cat needs to be petted and given treats and let out to be let in again later. Domestic service and dog service and cat service complete, at least for the moment, I return to the Northwest Territory and mushers making their way across a frozen tundra, or remaining pinned down by gale force winds. At home, the winds pin down the Juncos perched in the lilac. Only crows and jays can be seen flying about, buffeted by the blow, making landings like Alaskan bush pilots.

Standing again beside the wood stove, light from the south window illuminates my reading. I look up to check the feeder thirty feet away. Leaning into the window, I feel the draft between the sashes, smell the snow and a faint scent of wood smoke. This puts me at a desolate and hungry camp in the dark and cold of a January night in 1911, when The Lost Patrol began shooting their sled dogs to feed themselves and the remaining dogs. The entire entourage, man and dog alike, begin sinking into states of starvation, a hundred kilometers from respite.

Billington’s book is a modern story. Men in weatherproof clothing. Airplanes to drop barrels of dog food along the route for re-supply. Billington himself is a nurse, and with the crew are experienced guides, men that have lived here all their lives. Once a week during their month-long expedition, they will see a plane that circles overhead, checking the progress of the journey and safety of all parties. In the sled is a radio phone they could use in a real emergency. Between passages of the 1970 reneactment, Billington punctuates his narrative with corollaries to the ill-fated 1910 mission, including notes from Inspector Fitzgerald’s diary, which he kept up with until his last days. While Billington speaks of his powdered coffee creamer running low, and shares his energy-rich barley sugar candies, Fitzgerald and his party are eating their own sled dogs, boiling leather strips and bindings to eat.

Two of Fitzgerald’s men, Constables Kinney and Taylor, are so depleted, he commands they stay and pitch camp, while he and another constable forge ahead with hopes of reaching rescue and relief. Here, Constable Kinney died from starvation and exposure. Lying in the sleeping bag beside his dead comrade, Constable Taylor was overwhelmed, and took his own life.

I’m sitting in a kitchen chair and it’s seventy five degrees with the wood stove going. I sit in my pajamas and slippers and sip drip-brewed coffee, and think of these men. Try to place myself in my mind’s eye on that frigid, desolate and desperate trail. Fitzgerald’s companion passed from hunger and exposure the very evening the group split. A leader to the end, Fitzgerald folded the man’s hands on his breast, covered his face with a handkerchief, and said a prayer for him. He huddled by the fire, composing a brief will. All of his belongings were to be returned to his mother.

Billington and his party complete their trek without major incident. They intersect the early stages of construction on the Dempster Highway, and spend a number of miles sledding up the gravel roadbed. It’s a celebration of a centennial, and The Last Patrol is greeted in Dawson City like celebrities.  Festivities and feasts and a key to the city mark the end of their journey. They are eager to get on aircraft and return to their families after a month on the wilderness trail. While I draw parallels and make counterpoints between Billington’s trip and Fitzgerald’s, I don’t minimize the efforts of the modern group. It still takes a lot of work and energy and will power and maybe a little madness to set out on dogsled into the untrammeled and unpredictable Canadian back country.

In my mind I travel north and west to Canada, and back through time exactly one hundred nine years, more or less to the day. I try with greatest effort to imagine Fitzgerald and his party. The imagined world in my head is bad enough, and it pales in comparison to the real thing. There is no way to truly imagine what these men felt. The sickening realization that we are lost in a vast wilderness, hundreds of miles from the nearest human being. The horror of deciding we must kill and eat our own dogs, and feed them to the others. At the first, the dogs themselves refused to eat the meat. I wouldn’t claim to be able to imagine the desperation and sadness of Special Constable Carter, who had grossly underestimated the Northwest Territory’s ability to make every mountain and creek look the same as the next, even to experienced men. Starving, freezing and slowly dying in the dark, knowing he led himself and three others to this fate.

And alas, the great weight borne by the leader, the last to succumb, Inspector Fitzgerald. It was his error in trusting that Carter knew the way, in overriding his doubt that perhaps a more experienced guide would be required. In the final accounting, a leader of men feels fully responsible for all in his charge. Causal factors and outside forces may be observed, but for the leader, all responsibility lies at his feet.

The sky is beginning to dim. Clouds sport pink ribbons between purple patches. The dove, the jays and the juncos retire to that place they go when night falls. My journey through Billington’s book, across the windswept Northwest Territory, and following the doomed Lost Patrol, leaves me feeling as if I’d been on the trail all day. Exhausted by the schedule, spent from the many miles, I am happy just to be alive. I shelve the book, knowing the story of both these voyages will remain in my mind. Knowing that, next time I am snowshoeing through two feet of powder, a withering wind in my face, I will think of four men that never returned from their trail.

And I will say a silent prayer for them.

The members of the Royal North-West Mounted Police 1910-1911 Lost Patrol:

May they rest in peace.