Deadbeat. That’s what I’ve been for Life In Engleville.

I’ll tell you. Starting in January I took up sort of a new phase in my writing. I inadvertently started  a novel. Yes, inadvertently. I thought I’d write a sort of serial story in blog posts, but it quickly took on a life of its own, and has since occupied much of my precious and finite creative time. Look for “Blogroll” on the main page, and you’ll find Sasha of The Chukchi Sea. Now into its second “book”, Lodge. The story starts in Homestead (the first book) if you’re interested in reading and starting at the beginning.

Around the ranch, we’ve come quite a ways since the last post in March. We had a great blizzard going, and it did not disappoint us. About thirty inches of snow. It was too deep to snowmobile in, and the sled sank and bogged down. By the next weekend, riding was nice. Plenty of snow and the milder, sunny April days were welcome. Alas, by the following weekend, there was not enough snow on the trails to use the sled. Well, we’re set for this winter! 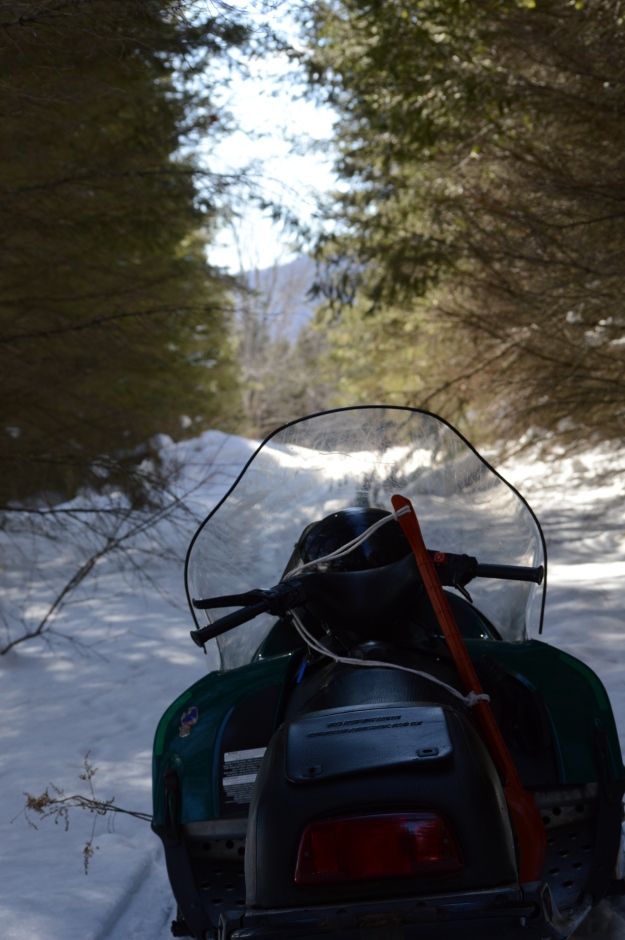 Elsewhere, we got the AquaMarie dry-docked in the cabana for some reworking from stem to stern. On the trailer, repairs were needed to the bunks (wooden glides covered with carpet) which were replaced, as well as the bow stop. Additionally, we upgraded the old steel cable winch to one that uses a web strap. No more wire stabs! Lastly, I finally replaced the lights. Went with submersible LED’s, and now she’s up to date (and I won’t go through 4 light bulbs a year). Took the motor down to Andersen Boats for a tune-up and once-over, bought a new gas tank, and a pair of new tires for the trailer. Additionally, we replaced the bow and stern lights, reworked the electrical a bit (new box, moved the light switch), replaced the single horn with a twin, and at long last added Old Glory, a U.S. flag. She made the trip to our beloved Forked Lake in the Adirondacks the first week in June for the father & son trip with Ryan. We brought our dear friend Carl with us this trip, and had a great time (and delicious fish). That trip, and the annual Camporee in July, will no doubt fill their own post!

At the ranch, we’re doing a little work on the Ark. Replaced the south-facing side porch and posts, added new stairs and railings. Recarpeted the living room, and weekend before last I repapered the kitchen walls. Some painting projects were executed by grandson Kacey, turning 19 in October. How that time has flown!

In June, near-disaster struck. One beautiful, sunny Saturday I went out to my John Deere to mow the ranch. Turned the key and heard a “snap”. Knew it was all over. Partly a panic, you can’t skip a week of mowing or you might as well bring a baler. Also heartbreak. I’m not really certain why, but I love the JD almost as much as a dog. We’ve been together a number of years, shared nearly 700 hours together, gleefully mowing yards and trails. Well, a number of those hours are logged by grandkids who love the JD, too. They use it more as a go-kart. Max has actually driven it around in the snow. Typically, granddaughters Lizzy and Maddie will tie a snow sled to the tractor, and Max will drive around trying to dump them. (This they also did with the Ski-doo!) Or they’ll hook up the garden cart and go for wagon rides.

So this past week, my son-in-law, a certified mechanic, delivered my Deere to me, all fixed and running better than new! Simple pleasures, eh? It doesn’t take much to make my day! I spent yesterday grinning like a fool as I mowed the lawn with the Deere for the first time since June.

It’s been a strange summer in a few ways. Weather has been almost bizarre. Record high temperatures, rain every other day, oppressive humidity. Now we are in the waning of the pinnacle days of summer. I’ve been a deadbeat for the blogs, but not for the world, as I’ve filled every waking moment with some activity or another all summer. Glad I carved out enough time to drop an entry, though it’s really not much.

Things are settling down a little now, as things do about this time of year. I’ll be back in the blogosphere real soon, and tell you some stories about the places I’ve been.

Some without ever leaving home.