Closed For The Season

Well, we’ve flipped the calendar page and now it’s January. Now it’s 2018. From here, it looks a lot like 2017, only with different calendar pages.

Here we are at Perihelion, the point in our blue globe’s orbit when we are closest to the sun. It seems ironic, but only for the northern hemisphere. Right now it’s blazing hot in the deserts of Australia and Africa and maybe South America, too. We’re something like four million miles closer to the sun than we are at Aphelion, in July.

It’s been quite cold, plenty of below-zero days and nights with the wood stove cranked up and draft stoppers stuffed at the bottoms of doors. Last weekend, when Sassy June and I took our Wonder Walk on our trails, it was 13 degrees F, but it was sunny and without wind. The pristine beauty of the freshly iced world and the new snow was gleaming bright and filled with fascinating formations.

At work, I found a number of ice “stalagmites” on the ground beneath the drip edge of the roof. It appears splashing droplets of water froze to tiny sprigs of grass, and successive splashes added to the girth. I took some pictures with the low morning winter sun lighting them.

We also had a day of freezing rain, which glazed everything with a thin coat of ice. Bushes and berries, grapevines and winter berries, rose hips and skeletons of Queen Anne’s Lace were transformed into nature’s holiday decorations. A Celebration of The Solstice. 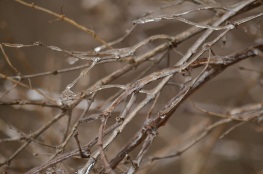 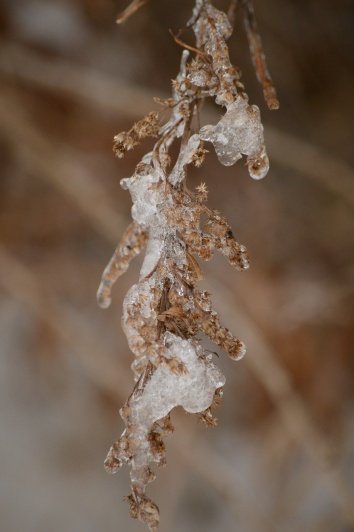 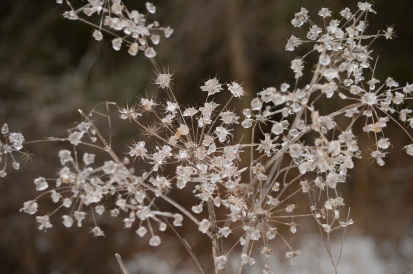 On December thirtieth, we loaded the FunBus with daughter Kerry and her beau Kenyon, and we set out to participate in the National Audubon Society’s Christmas Bird Count. This is an annual “census” of our avian friends. We drive out a specified parcel and note the number and species of birds we can find. We saw three bald eagles, certainly the highlight, and a wide variety of the usual characters.

We’re in this together.

Mallard on the wing

There was a steady light snow falling throughout the day, which made photography difficult. Aside from adding a haze to anything at a distance, it also messed with the autofocus, so most of my shots from the day are washed out or not quite crisply focused.

Had a lot of fun with Christmas this year. Being the grandparents, with children that have their own homes and children, we did a big themed gift for all three described households. Each opened a small gift while these big ones (they’re about six feet tall, you can’t quite tell by the photo) waited, standing against a wall.

Unfortunately, we haven’t yet had a good weekend of sledding weather (much to the chagrin of grandson Max, who saved all of his working-at-the-farm earnings from summer and bought a snowmobile). When it wasn’t five below zero F, it rained.

Ice on the ponds has formed well, with colder-than-average temperatures in December and early January. We hope to drill some holes in the pond next weekend, and see what we can discover beneath.

And so January is half gone already. Our winter half over, really. Winter can be tough in some ways, but it’s also beautiful and exciting. I’m in no hurry to see spring arrive.

Toboggans are terrible on grass.