New York State has a long deer hunting season, that starts with bow and muzzleloader seasons, after which comes the regular firearms season.

Son-in-law Matt and Grandson Maximus are avid hunters, going back several generations in the hamlet of Buel, five miles north of Engleville. It’s been quite a while since I stalked deer with a gun, and I’ve moved on to a new hunt. With my camera.

I’m a catch-and-release fisherman. Except for a couple of shore dinners while camping up north at Forked Lake, I measure, photograph and release the fish I catch. I decided that since I’m past the game-taking stage in my life, I’d start a new thing: “Shoot and release”.  It’s unlawful for members of a hunting party to be unlicensed, so I have my big game tags on my back as we pursue our quarry. However, my Nikon is the only thing I shoot with.

Opening day I joined the lads and a couple other hunting buddies, Mike and Jeff, and we went on a couple of deer drives in Buel. Push-hunting, or driving, is a method that calls for a couple of members of the party to take a stand at advantageous spots, while the “drivers” start along the opposite side of the area (typically woods, swamps, marshes and the like) and we make noise and hoot as we drive the deer out towards the shooters.

After a couple drives in Buel, we headed to daughter Kerry’s farm, where Matt and Max have box blinds. These are raised stands enclosed by walls. We spent a few hours in the blind, until dark, without seeing any deer. Max got himself a good nap, though.

The view from the blind

Distractions in the woods

The day after opening day, Max got his buck. He and his Dad were at Kerry’s, and Matt drove the swamp towards Max. A fine 6-point buck was Max’s reward. It was a beautiful deer, in good health, with no sign of ticks.

As the only unarmed member of the hunting party, I’m always a driver, or “pusher”. I get some great exercise and see some trails and terrain that’s new to me. The hunting party is actually glad to have me, as fewer and fewer folks pursue hunting these days. Back in the when, there would be a dozen guys assembled for some big drives. Sometimes the group would take more than one deer in a single drive.

I’m a little conflicted in the sense that I myself don’t kill things, and also I love all of nature and all its creatures. Thanks to Disney and The Yearling, many of us get emotional over seeing a deer killed. Thankfully, my over-sized human brain is able to understand the concept of overcrowding. There was a time when predators would take their fair share of deer, and there were no fields full of corn or pumpkins to feed them. Nowadays, deer get plenty to eat, and have power line right-of-ways and rear easements to wander through safely. If we don’t take responsibility for reducing the deer overpopulation, they’ll all suffer with starvation and rampant spread of diseases. They’ll also run out in front of your car or even occasionally crash through a picture window into someone’s living room.

For me, I’ve taken to joining the hunt to spend time with my grandson and favorite son-in-law (okay, so he’s my only son-in-law, but still…) in the great outdoors in all weather. It’s a fine adventure for an old Armchair Zen grandfather, and I am easily mesmerized by the many photo opportunities that present themselves. Alas, I’ve yet to “shoot” a good deer on a hunt.

Mostly it’s about taking game, but nearly as important is the camaraderie of the hunt. Jeff arrives with “tomato pie”, very popular in Utica, from which he hails. Between drives we’ll talk about the deer we saw or didn’t see, yesterday’s drive, tomorrow’s plan. We recall names of those that hunted before us and have since passed on. Max’s grandfather Mert, Mike’s cousin Ken (they say don’t mention Ken Jones locally, he was a real character. Loved or hated, no in-betweens). A neighbor stopped to ask where we were hunting and if we had permission, and after a couple of well-timed name-drops, the neighbor was glad to have us nearby. And “Yes!”, she said, she’d be glad to get some venison if we were successful.

So, another year of trucks lining the roads on weekend mornings, guys walking around armed like soldiers, and the sound of shotguns and rifles ringing out through the hills. It’s not for everyone, but it’s a good respectable sport, and we are responsible sportsmen, and we have some great times out in the snow and mud of November. 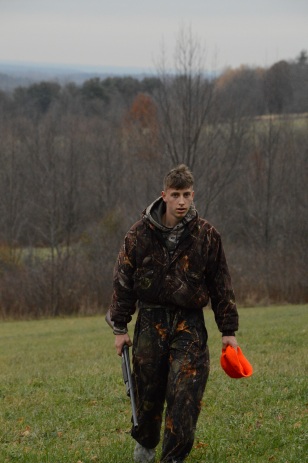 Heading for the stand

This post is a follow-on to “Walk With Me” (10-27-17), wherein we walked our trails from the Great Lawn, and eastwards up to the top of Nishan Hill.

Across the top of the hill on our walk, we arrive at the great forest we call The Wonder Woods.

“Seek not after answers, but after the joy of wonder.” – Chuy The Wonderdog

We find so many fascinating and curious things herein, hence the name. It is a breathtaking and beautiful place to dwell and linger, wander and wonder, in all seasons.

It’s a marvelous place to be in Spring, as the days grow longer, the snows recede and vanish. Spring Robins will roost in the pines at sunset. By the hundreds they’ll noisily gather in the grove, settling for their evening’s rest on their migration northward. The earliest tell-tale signs can be found of new growth, the thawing of our world, and nesting season.

Enjoying the Last of Snow

Throughout the long summer, the woods grow thicker with vegetation and undergrowth. Squirrels rule the day, and they will begin barking at you as you walk through their domain. Summer bird visitors are seen now. Woodpeckers love the aged wood. From time to time we’ll see the huge Pileated Woodpecker, looking like Woody himself. An indigo bunting is an eye-catching sight, and after the Goldfinches come their near-lookalike, the Common Yellowthroat. Catbirds will follow us on our walk, albeit at a safe distance, and the Cedar Waxwings will work at gleaning the wintered-over seeds of the Sumacs.

Turkeys scratch and dig in the forest floor for grubs and worms. They walk the same heavily-trod path followed by deer, coyotes and even the occasional black bear. To some, the wood may look untrammeled, but those with a keen eye, the trail can be seen. A few kicked-up leaves here, a snapped twig there. It’s easier to see if you get down to coyote level.

Doe and Fawn in the Glen

Of course our wood is beautiful year-round, but few seasons are as striking as autumn. Granted, the landscape is dramatic and captivating in the snow, and we find as much to see therein. There’s no competing with fall color, and the activities that accompany the season. Deer will begin scraping the velvet off of their antlers in August. Squirrels and Chipmunks are running marathons to gather and store food for the coming winter. Deer are consuming everything they can while it’s available, before being trapped in their winter yards. Overhead, Canada Geese wave long goodbyes, and mile-long flocks of Starlings will transit the drumlins of Engleville.

No time to say hello, goodbye. 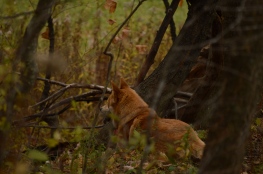 Down to the Creek

The Woods have Ears 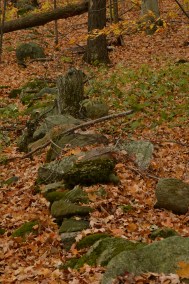 Something there is that doesn’t love a wall

This Meeting is Called to Order

No Worries for Lichen 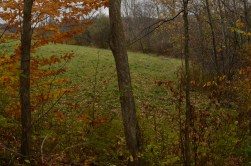 Edge of the Glen

Winter is a wonder unto itself. The landscape seems almost alien. Frozen and packed with snow, it is far from devoid of life and activity. Winter is the most visceral season, with winds whipping up snow devils and piling drifts. Like the sand of a beach, the surface tracks activity among forest friends. Big turkey footprints, tiny mouse footprints, trails leading every which way, some burrowing beneath the snow. It’s a season of light, even though the days are shorter. With the canopy devoid of leaves and clear frigid air, light finds all corners of the woods. 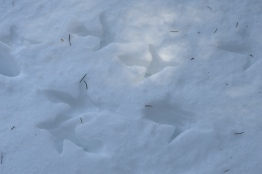 Ice Off On West Creek 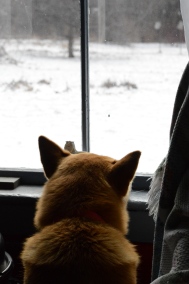 In all seasons and the seasons-between-seasons, the Wonder Woods is my ever-present friend and guardian. There is never a trip into the forest that does not bear some gift for you.

Look us up if you’re out our way, and we’d be glad to take you along.